It all started when a ten year old boy from America traveled half a world away to wind up meeting another 10 year old boy in a small town in Malawi, Africa. The two became instant, life long friends. Riley Petitt from Loveland, Colorado and Timothy Mahoney from Embangweni, Malawi. Flash forward six years and the two are still very close companions. This part of the story isn’t an uncommon one…anyone who has ever traveled to the Warm Heart of Africa can share a story similar to our’s. The people of Malawi have a way of changing your life forever. Once you meet them you will never be the same.

Timothy Mahoney grew up an orphan, having lost both his mother and father. Unlike other children in Malawi, Timothy was fortunate and had a living grandfather who was able to care for him and raise him. However, due to the widespread poverty known to Malawi, Timothy’s grandfather could not afford secondary school fees. Like most kids Timothy would be forced to drop out of school after primary school or better known as 8th grade here in the United States.

But Timothy’s fate would prove otherwise. Timothy touched the heart of many Mzuzungus traveling to Malawi. (For those of you who do not speak Tumbuka or Chichewa, Mzungu means white person. It is the name given to all foreigners visiting the country.) But one Mzungu in particular was deply touched by the story that is Timothy Mahoney, Riley Petitt. Riley came home from his first encounter with Timothy in Malawi, and was determined to fund raise to bring Timothy to America to attend secondary school in Loveland, Colorado.

After encountering several obstacles, it became a reality that we wouldn’t be able to bring Timothy to America. Although we were saddened that Timothy wouldn’t be joining our family, we decided we would simply alter our game plan….hence, the birth of Educating Malawi and the start of the Africa Bags Scholarship program.

Timothy Mahoney has since been the recipient of an Educating Malawi Scholarship for two years in a row and has just completed Form Two in Embangweni, or better known as the sophomore year of high school here in the United States.

There is great need for more scholarships in all of the Africa Bags groups and villages. There is an endless number of children just like Timothy that need the opportunity to attend secondary school. SPONSOR a child and make a difference today! 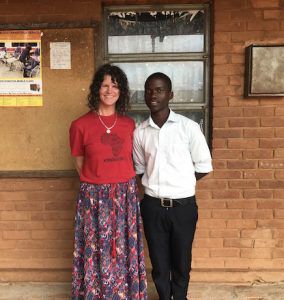 Africa Bags scholarship recipient, Dumisani Chavula, is in his fourth year of receiving his scholarship.  He is a fantastic student who continues to work hard with a passion for learning.

Dumisani is now in Form 4, the equivalent of 12th grade here in the U.S.  He attends the Embangweni Community Secondary School.  We are very proud of Dumisani as he has held the number one position in the entire school for his excellent grades for the past four years!  At the end of Form 4 Dumasina will take the National Standards Test to determine acceptability into University within Malawi.