Kamweko Village was the first village visited by Africa Bags. On May 6th of 2007 Todd and Holly were welcomed by 30 members of the village. The members of the community showered us with their joy over the Africa Bags project and the opportunity it provided them with. Kamweko village consists of approximately 200 people that live within a 3 mile area. Of these 200 people, 70 of them are children and 50 of these are orphans. These orphaned children have been taken in by others from the village who barely have the means to provide for themselves.

Besides subsistence farming, the villagers of Kamweko earn money by collecting fire wood and carrying it over 4 miles to the town of Mzuzu to sell. The villagers carry large bundles of wood on top of their heads, walking over 4 miles, often without shoes on their feet. This days work will only earn them $1.00 to $2.00 for their hard labor. The villagers of Kamweko hope that their partnership with Africa Bags will put an end to the days of hauling firewood for money.

Joseph Chavula, one of the project co-ordinators, is a product of Kamweko Village. He has helped to create the plans for Africa Bags to build a community center within Kamweko. It will be used by the villagers as a central meeting point for gatherings and fellowship. The villagers will also use the building for Africa Bags production. In making the center, the villagers will provide all labor needed on the project. They will also make all the bricks needed to construct the building. The bricks are made from local dirt and then dried in the sun. A kiln is then constructed out of the bricks themselves and a fire is started inside of the bricks. After a couple days of the fire’s heat the bricks are ready for use. Land for the building has been donated by Joseph`s mother, Jessie. Africa Bags will raise funds from donations for the metal roof, concrete floor and solar panels for electricity. Fund raising will be done in steps with the roof being the first phase.

Kamweko has also set up a project committee. It is in charge of overseeing the building of the community center and of bag production. The committee is also responsible for dispersing funds to the village. Africa Bags will work closely with the project committee to make sure that the funds issued to Kamweko will go to the most urgent needs of the village.

One enterprising lady from Kamweko has begun to make necklaces out of beads and a locally grown seed. The sewing group has built a large chicken coop. They are able to raise over 100 chickens at a time and sell the birds locally. Numerous members of Africa Bags in Kamweko Village have been able to purchase metal roofs. This is a major investment in Malawi and really helps during the rainy season. Others in the village have begun raising pigs.

Another important development that has happened recently is that most of the families of Kamweko have been able to buy government subsidized fertilizer. This fertilizer can increase crop yields by up to 50%. This is an example of how Africa Bags has tried to help those in Malawi to help themselves. Plentiful harvests will be a great first step in reducing hunger in Kamweko.

Two years ago the Kamweko Africa Bags sewing group started their own empowerment project within Kamweko Village to help fight famine for fellow village members not participating in the Africa Bags project. The Kamweko Bean project began with only 5 members and has now grown to over 30 members throughout Kamweko Village.  The project not only provides valuable nutrition to the participants, but it also provides extra beans for project members to sell locally to provide their family with a source of income.  Furthermore, the project focuses on planting the bean plants along side the maize crops.  This process helps add nutrients back into the soil and creates a natural fertilizer for the food. 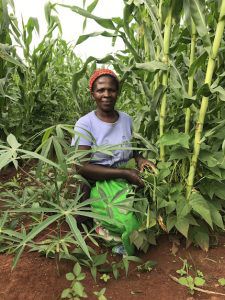 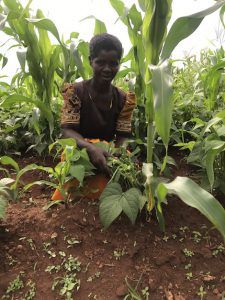